On Saturday morning, David and myself met with Thu Kha Hang Sar Headmistress Chan Chan on the school site. After taking measurements of the current school buildings we were able to draw the buildings in CAD and place a render of the position of the new classroom buildings. We were then able to take Chan Chan through each aspect of the school design to ensure she fully understood the classroom layout. We discussed the use of colour within the building and Chan Chan told us how she would like to use the colours from the teaching staff’s uniform in the design. It was great to gain her ideas and thoughts on the design and we look forward to working alongside and implementing her ideas as we move forward together.

In order to understand the scale of size of the classroom we took some of the current pieces of school furniture and placed them outside within the plotted grid of the new classroom layout. This was a great way of allowing us to gain a clear understanding of how the classroom would look and feel inside. We found that the best layout for the chairs was in a horseshoe shape, allowing all students to see each other during a lesson and also allowing the teacher to have the ability to walk up and down the middle of the desks. It was important to Chan Chan and the teachers that we understood where the white boards would be positioned and where the school flagpole would be positioned. After reviewing the layout and materials to be used, we were happy and confident that Chan Chan was pleased with the school design and knew she was keen to start the building project. Not one to miss a photo op one of the teachers suggested that Chan Chan start  the first foundation hole.  We passed Chan Chan a shovel and led her to where the first foundation foot was to be dug.

With great excitement she placed a pair of gloves on, took the shovel and started digging. Soon afterwards the school teachers asked for gloves and tools and within an hour the Building Trust volunteers and School staff were getting stuck in and mud began flying everywhere. In the first afternoon, the team managed to make a great start on the foundations and slowly began to be able to visualise as to how the school would look. In the late afternoon, we had a surprise visit from the Head of the School Council who arrived with his wife and a much needed platter of jack fruit to feed to the volunteers and provided them with a much needed last boost of energy to keep them going until the early evening.

On Sunday, the volunteers arrived on site bright and early ready to start a full day of digging foundations. Over night the skys had opened and all of the holes that had already been dug and filled with three car tyres, were now full of water and in some holes a family of frogs! 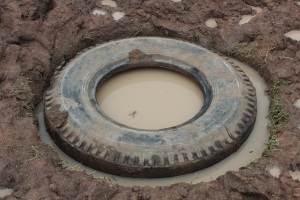 We knew that building in rainy season would be a challenge and we were to find out over the next few days how much a challenge it would be. As David went to scout out more car tyres with Matt our cameraman, the volunteers continued to make progress digging foundations and emptying the holes off water and then filling with tyres. We were shocked to see David and Matt return a truck load full of truck tyres instead of car tyres. The original foundation plan was to place one truck tyre and two car tyres underneath the earth. However, David was to find out that a very kind local Thai lady would offer as many truck tyres as we needed for free. We therefore made the decision that it would be better for the school structure and cost that we place two truck tyres with one car tyre on top. This was great news, however meant the volunteers finished foundations were not quite finished as they now needed to be as wide as a truck tyre. The volunteers remained upbeat and split into groups with two widening the finished car tyre foundations and the further two groups starting new holes the width of a truck tyre.  David and Matt returned to the truck to collect a further 32 truck tyres!

We were sad to see our cameraman Matt leave on Sunday evening, however we knew he had to get back to his real job and looked forward to seeing more of the footage he had captured over his two week stint in Mae Sot.

On Monday the volunteers had a day off,  several were very lucky and managed to gain a day pass visit to Mae La Camp which they reported back as an interesting, eye opening trip. Meanwhile, in the Global Neighbors workshops, Chris and his team of local apprentices began work on the steel foundation posts for the first school module. The foundation is made up of a layer of gravel, a truck tyre with the steel foundation post slotted inside then a further truck tyre and one car tyre placed on top. The tyre hole is then filled with gravel and the footing fitted into place. We were glad to know that Chris’s team work incredibly fast and managed to make the first foot posts by the end of Monday.

On Tuesday, David dropped myself and the volunteers off at the school site to continue digging holes. By Tuesday the school site was very water logged from the continuous down pours of rain and the water remaining in the ground. Volunteer Ben resorted to wearing swimming goggles in order to get the mud out from the bottom sections of the foundation holes and not get mud in his eyes. By midday on Tuesday the volunteers were covered from head to toe in mud and were really making progress on the foundation holes. Even with a heavy afternoon downpour they stayed out on site determined to get as many holes dug in one day as possible. It was great to see their positivity and determination to get the job finished.

By Wednesday, the volunteers were beginning to feel slightly less upbeat about spending the entire day digging holes, however I think it helped keep motivation by seeing the children they were building the school for so close to them every day. I sat amongst the children as they waited for their school bus as they each shouted out ‘Hello’ to the volunteers digging hole. 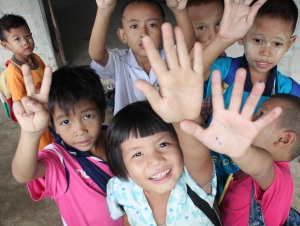 I spent the morning cleaning and painting the first of the school foundation posts. First using white spirit to remove any rust and dust and then painting with a layer of red primer. After the primer had dried I then gave each post 3 coats of black enamel paint. The primer will help to keep the steel from rusting.

After spending the morning in the workshops,  we went back to the school site to test out one of the painted foundation posts inside a truck tyre. In order to place the post inside the tyre, a small cut had to be made to the tyre. We were happy to see the foundation post fit perfectly. The next morning, Ben one of the UK volunteers and David accurately measured the placements of the foundation posts and prayed the rain would hold off for a few hours to allow us to drain the holes of water and fill with gravel and tyres. We were very pleased when the rain held off and yesterday afternoon we managed to fix our first foundation post!

Solving a World of issues through design